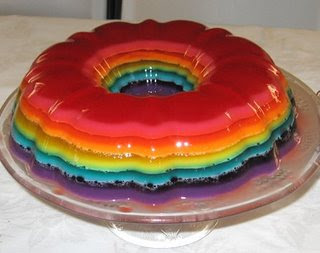 Carolyn made this for Thanksgiving dinner today then sent me the recipe so it’s her recipe now hehehe. It looks lovely 🙂

Chill again now for about an hour.  Dissolve next pkg. of Jell-O in 1 1/4 cups of boiling water once that is mixed take 3/4’s of a cup of the Jell-O and set
aside, let cool (about 10 minutes) so that when you pour it on the 2nd layer it does not dissolve the other Jell-O layers.

Once all the Jell-O is in the ring mould chill overnight.

To unmould, dip mould in warm water for about 10 seconds. Gently pull Jell-O from around edges with moist fingers. Place moistened serving plate on top of mould. Invert mould and plate; holding mould and plate together, shake slightly to loosen. Gently remove mould and centre Jell-O on the plate.